Helen Levitt (1913-2009) was a photographer of the New York streets, the city where she was born and lived all of her life. In recent years, Levitt’s work has undergone something of a rediscovery with major exhibitions in Paris, New York, and Arles. She is currently the subject of a retrospective at the Photographers Gallery in London which has also been seen in Vienna.

Her photography work falls in two distinct stages, the black and white photographs she took in the 1930s and 40s and the colour photographs she produced after she returned to the medium in 1959. Levitt was inspired to start taking pictures with a small 35mm Leica camera after meeting Henri Cartier-Bresson in 1935. His sophisticated photojournalism, with its focus on capturing the ‘decisive moment’ and the ‘rhythm of the world of real things’ was a major influence on Levitt, as it was on other photographers of the time such as Lisette Model, Louis Faurer and Weegee (Arthur Fellig). These artists are sometimes referred to as the ‘New York School’ of photography and their work was published by Ralph Steiner in the liberal PM Weekly newspaper. Her other major influences were Walker Evans (Levitt studied with him and worked as his assistant) and the Photo League, which promoted a socially committed form of documentary photography.

Levitt received early recognition for her work with an exhibition at the Museum of Modern Art in 1943, where the curator Beaumont Newhall was actively engaged in collecting and presenting photography as an art form. Despite this early success, she abandoned still photography for film in 1948, making several films that are now seen as important milestones in the development of independent film.

Levitt returned to photography in 1959 when she received a grant from the Guggenheim Foundation to revisit many of the areas she had photographed in the forties. This time she used colour film and presenting the work in the form of slide shows. Although colour photography had been used in fashion and nude photography (including by Saul Leiter and Edwin Blumenfeld in New York), Levitt’s use of colour documentary photography was pioneering. In 1965, Levitt published a book of her early photographs (A Way of Seeing) with James Agee considered to be one of the classic photobooks.

She is now widely regarded as one of the most significant street photographers of the twentieth century. For over fifty years she photographed men, women, and in particular children on the streets of Harlem, the Lower East Side, and the Bronx. Her work is street photography in the purest sense, nearly all of the photographs depict the streets in daytime when people are going about their business. There are very few interior shots in her published work and no night scenes as there are with other New York photographers of that time such as Lou Stoumen and Model. Apart from a brief visit to Mexico in 1941, Levitt did not photograph anywhere other than New York.

The limited subject matter could have led to a certain sameness but it is a mark of Levitt’s skill that photograph after photograph excites the eyes. For Levitt, the street is a stage and she captures the daily performance on it with humour and an affectionate, poetic, vision. The pictures crackle with the energy of the streets. This is humanism with a New York edge – sharp, without pity and with enough toughness to keep sentimentality at bay. As Max Kazloff has said: ‘Levitt always kept her distance from her subjects but it was a warm distance.’

Helen Levitt quietly tracks down and captures moments with her subjects as unobtrusively as possible. Some of these images are literally snapped in secret, as in the case of her subway pictures taken in 1938. Here, the influence of Walker Evans is clear. He had also taken a series of pictures of people on the subway and had shown Levitt how to hide the camera so they could be taken without the knowledge of the subject. In the contemporary age of upskirting and posting images online, the ethics of taking photographs of people without their knowledge may seem questionable but it did not seem to concern photographers at the time – other photographers such as Model and Humphrey Spender used hidden cameras and there is little to suggest they were troubled by the practice – perhaps the era’s more limited means of distributing the images was a factor, or maybe people were generally less bothered about privacy and more willing to have their pictures taken. For the photographers it seems the desire to capture people in unguarded moments outweighed any ethical concerns.

Levitt’s pictures from this period are records of existence rather than portraits – there is no relationship between the photographer and her sitters, and she is not concerned with perfect composition or capturing the psychological state of her subjects.

Children and in particular children at play are the most common subjects in her early works. In the wake of the great depression, children grew up on the streets. Life was lived on the sidewalks, derelict backyards and the stoops of tenement buildings, particularly during the oppressive heat of summer. Despite the squalor of their environment, the children are depicted as assertive and confident, sometimes menacing, and are rarely presented in a sentimental or cloying way. Duncan Forbes has written how, for Levitt, the child at play is a subversive figure ‘full of transgressive possibility.’ Levitt captures their energy and optimism without condescension. Whether Levitt is photographing children or adults, these are affectionate portraits with a focus on family and community – there is none of the savagery that one finds in Lisette Model’s photographs of nightclubs for example or Weegee’s depictions of the seedy underbelly of New York life.

Again, it is interesting to consider the relationship between the photographer and the subject. It has been suggested that Levitt used an angle finder on her camera so she could photograph individuals without their knowledge. For many of her images, it seems the subjects were unaware they were being photographed, but this is not always the case – some images suggest dialogue. In the image below, for example, there is a clear interaction between the children and Levitt – they are showing off, presenting themselves to her in a proud way.

Levitt had an interest in silent film and gesture. This is one of the central themes highlighted in the Photographers Gallery exhibition. Gesture freezes movement and isolates a moment in time. As such, her pictures can be seen as like stills from an unfolding performance. Sometimes the capturing of certain gestures, particularly where the body is distorted, can give the pictures an unfamiliar, almost surrealist element. Children dance and dress up, engage in mock fights (the child with toy weapons is a recurring motif), disappear into boxes or are contorted in tight spaces. They appear in grotesque Hallowe’en masks – in one stunning picture playing musical instruments like extras in a creepy movie. In fact, the silent film ‘In the Street’ that Levitt made with James Agee and Janice Loeb is like an animated version of her still photographs and deals with the same motifs (children in masks, dressing up, mock fights).

The works give the impression of a parade and it is watched by those sitting on the stoop, imprisoned behind windows or leaning on the sill desperate to join in the fun outside. There are few depictions of the glamourous side of New York.

The colour photographs that Levitt took from 1959 onwards are different. This is partly because colour presented different constraints (slower shutter speeds, for example, meaning less ‘action’) and different aesthetic considerations such as how to present depth and contrast but it is also because the streets themselves had changed. Children now played less on the streets and the onset of television had moved families inside. Her colour photographs therefore moved away from depicting children at play and the representation of community activity on the streets to more carefully framed shots which focus on the abstract qualities of area of colour and pattern. Older people now tend to dominate as subjects. These photographs are perhaps harder to read. The scenes are less playful, people’s actions more purposeful and constrained. There is still a focus on gesture and of small dramas being played out but now the people seem oppressed by the city around them – in one picture a family is squeezed into a telephone box. Likewise, in this picture, a child is crammed awkwardly in a tight space against the wheel of a car, like a spider. The image is extreme and unsettling. It harks back to some of her earlier images, where figures are made to appear grotesque through the use of extreme distortion – bodies folded in half or twisted into awkward shapes. 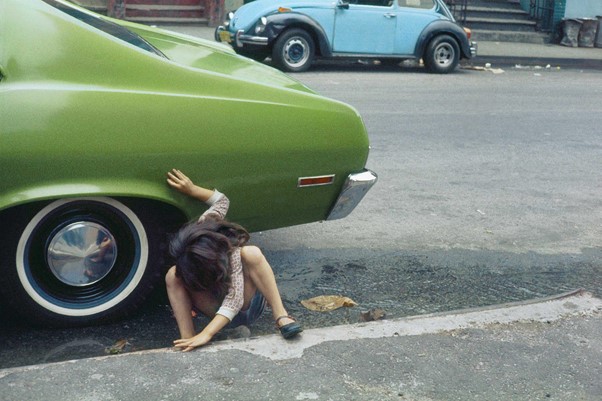 Levitt frequently cropped her black and white images, but the colour photographs are carefully composed in the camera. Areas of foreground colour are used to create space and suggest dynamic relationships. In this photograph from 1973, the figures are waiting to depart – one is looking up to the sky, the other wearily looking down while a man in the background clings on to the doorway. The eye is drawn between the two patterned dresses and the cases. There is a sense that we are at a point of change and that it is not necessarily one for the better.

Levitt was a humane and moving chronicler of New York working class life, a skilled filmmaker and a pioneer of colour photography. The excellent retrospective of her work at the Photographers Gallery in London is on display until 13 February, and includes 140 prints from all stages of her career (the earliest picture is from 1936, the most recent from 1988). As Levitt only exhibited/published around 150 photographs during her lifetime, the exhibition therefore represents a considerable part of her total output. The exhibition also includes the film ‘In the Street’, as well as colour slides, printed material and contact prints. The exhibition is curated by Walter Moser and Anna Danneman and is a collaboration with the Albertina Museum in Vienna (where it appeared in 2020).

The inclusion of a wide range of material enables us to make a more rounded appreciation of her work – in particular how her film work relates to her wider oeuvre. Although the pictures are from a different time and of a place I have never visited, they still resonated with me emotionally. They are beautiful images but they also record and convey moments of real experience and in doing so bring back to life a street culture that has gone forever.

David Ford is a writer based in London with an interest in photography. His work has previously been published in Litro.